To share your memory on the wall of Harry Little, sign in using one of the following options:

Print
HARRY WILLIAM LITTLE, 88 of Winterstown, PA died on Friday, October 2, 2020 in York Hospital. He was the beloved husband of Gloria M. (Anderson) Little with whom he had shared 69 years of marriage.

Born on November 3, 1931 on the Litt... Read More
HARRY WILLIAM LITTLE, 88 of Winterstown, PA died on Friday, October 2, 2020 in York Hospital. He was the beloved husband of Gloria M. (Anderson) Little with whom he had shared 69 years of marriage.

Born on November 3, 1931 on the Little Family Farm in Harford County, MD, he was a son of the late John and Mary (Carman) Little. Harry was a hard worker, being born during the Great Depression; he learned the importance of determination and a strong work ethic. A lifetime farmer, he purchased his wife’s parents' farm in 1964 where Harry shared the love of farming with his family. In addition to his love of agriculture, Harry was a long distance trucker, driving with Consolidated Freightway for over 43 years based in York, PA. He enjoyed going to auctions and in his younger years, horseback riding and boating.

A veteran of the Korean War, Harry had served with the US Army. To reflect on his service to his country, military honors will be presented at graveside by the York County Veterans Honor Guard.

In addition to his wife, he is survived by:
Four children – all residing in Winterstown-
Rosalie McWilliams; Thomas Little (Sherry); Jody Little (Sally) Orcen Little (Katie)

He was preceded in death by his siblings: Leona, Annie, Charlie, Hazel, Ruth Orcen and Esther.

A graveside service will be held on Friday, October 9th in Stewartstown Cemetery, Stewartstown, PA at noon.

In appreciation of Harry’s service to his country and the honors presented at graveside, his family would appreciate memorial contributions to the York County Veterans Honor Guard, PO Box 712, Mt. Wolf, PA 17347.
Read Less

Receive notifications about information and event scheduling for Harry

We encourage you to share your most beloved memories of Harry here, so that the family and other loved ones can always see it. You can upload cherished photographs, or share your favorite stories, and can even comment on those shared by others.

Posted Oct 05, 2020 at 11:07am
I will always cherish the times we chatted about whats next to do on the farm, complaining about life, or just enjoying a cup of coffee at the kitchen table! He took great care of our boys, specially our oldest Ty. I will always be great-full for the time they were able to spend together. He will be greatly missed and always in my heart! Katie Little, Daughter-In-Law
Comment Share
Share via: 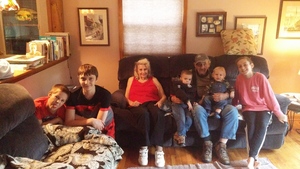