To share your memory on the wall of William J. Scott, sign in using one of the following options:

Provide comfort for the family by sending flowers or planting a tree in memory of William J. Scott

Provide comfort for the family by sending flowers or planting a tree in memory of William J. Scott

Born in the borough of Fawn Grove on January 31, 1948, Bill was the son of the late Joseph E. and Margie (Campbell) Scott. He was a 1967 graduate of Kennard-Dale High School in Fawn Grove where later in life he proudly served as the mayor. Bill spent his career as a firefighter at Aberdeen Proving Ground and retired as a Captain in 1998 after more than 25 years of service. He was also a life member of the Citizens Volunteer Fire Company and a member of the National Fire Academy Alumni Association. His other memberships include the Nittany Lion Club, Fawn Grove Cemetery board, Fawn Grove Borough Council and the Fawn United Methodist Church. Bill served as president of the York County Mayors Association and was a charter member of the Fawn Do Nothing Club. He was also a member of the Thorndale United Methodist Church
Time spent at the beach with his family, friends and especially his grandsons brought him the greatest joy, with a good game of Pickleball adding to his enjoyment.

In addition to his wife, he is survived by
One son
Matthew D. Scott of Chester Springs, PA

One sister
Elizabeth Skinner and her husband, Joseph of Dagsboro, DE

He is also survived by many nieces, nephews and great nieces and nephews.

His sister, Jean Schmidt and his foster brother, Francis “Red” Volz along with his parents preceded him in death.

Because of the ongoing COVID situation, the family has chosen to delay services for Bill until a time when everyone can gather safely to remember his life.

Receive notifications about information and event scheduling for William J.

Print
Due to the continuing situation with the virus, the family has decided to schedule services when it is deemed safe for all to gather. Thank you.

We encourage you to share your most beloved memories of William J. here, so that the family and other loved ones can always see it. You can upload cherished photographs, or share your favorite stories, and can even comment on those shared by others.

Posted Nov 24, 2020 at 10:03am
Captain Scott was a man I looked up to at the APGFD. He was my Captain for many years and taught me many things at the APGFD. He always told you like it was and never sugar coated anything. Bill was a straight shooter who always had your back and always had time to talk about anything. May you Rest in Peace Captain Bill till we meet again.
Comment Share
Share via:
JH

Posted Nov 23, 2020 at 07:07pm
Diane and Matt, I was shocked and saddened to see this. I have known Bill for nearly 60 years and I have pleasant memories of our time together. From our K-D days, to his time watching Matt play basketball. He was a sincere and supportive friend, father, and husband. My heartfelt condolences to you and the family.

Posted Nov 23, 2020 at 04:45pm
Dear Diane, Matt, and family, Our thoughts and prayers are with you at this time.
Many fond memories of the Scott family over the years. My folks lived in the upstairs apartment of Bill's family house, Spring 1957 to Spring 1958 while our house was being built three doors toward town. I showed up that February.
When I was elementary school age we would play football with Bill in his back yard. It may have been Bill and somebody else aganst the rest of us. He was a giant compared to us at the time, someone would grab a leg to slow forward motion until the rest of us could pile on to take him down or at least stop forward progress.
He enjoyed being an active part of the community, as a volunteer fireman and later mayor of Fawn Grove for which he served our little town proudly.
Duane Herbert
Comment Share
Share via:
DT

Posted Nov 21, 2020 at 08:44am
Diane, Matt and Family, I am so sorry for your loss. I always really enjoyed seeing Bill when he came back to Fawn area for visits.
Bill along with Jim Gibney and Joe Herbert used to test hose for Fawn Grove Fire Company in the Church parking lot which I lived next to. As a young child I would meet up with them and they would let me flow water from the hose and I would help them roll the hose afterwards. This is probably a big part in why I chose my career as a firefighter. I joined Fawn Grove Fire Company and served with Bill for some years there. In 1987 I was hired at Aberdeen Proving Ground Fire Department and had the pleasure of not only working with Bill but car pooling to. Bill was my Captain at Aberdeen Proving Ground and he was great to work with. There are just way too many fond memories to mention. Bill will truly be missed. Rest in Peace Bill.
Comment Share
Share via:

Posted Nov 19, 2020 at 03:58pm
Diane & Matt, Billy and I are so very sorry for your loss. Bill was such a funny guy! We will always remember his wonderful sense of humor and we're so blessed that we got to know him and were honored to call him our friend. May your faith and the love of family and friends comfort your during this most difficult time. Sue & Billy D'Amico.
Comment Share
Share via: 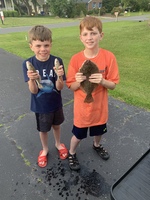